The year 2013 was a good one for me. While saying goodbye to my Kona broke my heart, my business did well and I published my first book. I launched All Things Left-Handed and Simple Giving Lab.
I learned a lot and met some amazing bloggers, entrepreneurs and nonprofit rockstars in real life and online. I traveled to Orlando for Be the Change, to Chicago for BlogHer and to New York for the Social Good Summit. I even had my own writer’s retreat and went off the grid for a week with my family.
I was fortunate enough to have my writing featured on several websites this year. In my GOOD.is article on how I was shopping with a conscience for the holidays, I mentioned the idea of giving the gift of an experience. My husband and I decided to surprise our boys with a trip to Syracuse University to see a basketball game on New Year’s Eve. They were super excited, especially G, since we’ve been telling them that we’d take them to a game once they were old enough.
Syracuse is a special place to us because it’s where my husband and I met freshman year. It’s also where we were married. To say that we have memories there is a huge understatement. And it was incredibly special for us to share the city and school where we fell in love with our children.
After a long drive from Maine, we were met by frigid temperatures, gray skies and large snowflakes. The boys got to experience a typical Syracuse day, where you weren’t sure if it was snowing up or down.


We pointed out our favorite spots on campus, the places we used to live and  and the spot (now a bank) where we went on our first date. We told them about the many stairs we had to climb to get to our dorm when we were freshman, and the secret underground tunnels we used to get to the dining hall.

We noted all the different colleges on campus and which ones we spent the most time in. At one point, the boys even got to see one of Syracuse’s black squirrels.

The boys learned that we weren’t exaggerating when we said we always had to walk uphill anytime we went somewhere on campus, and that the wind was always blowing in your face.

It was so cold we decided to head to the Carrier Dome early. I almost got sick taking this photo (due to my fear of heights), but it was a pretty cool view of the inside of the dome.

We got to see the number two team in the country in their pre-game practice, and G got to take some photos with his new camera during the game.

Biz got bored and took a selfie on my phone.

We let him run around during halftime to get his “energies” out. 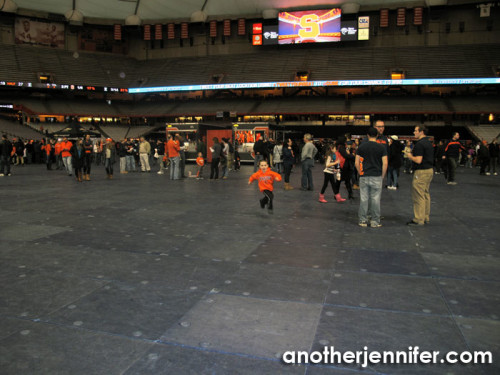 While the Orange won the game, they did not score 75 points, which meant no free tacos. Biz was disappointed, as I think his favorite part was cheering for tacos during the last couple of minutes. It reminded me of my college days when I didn’t mind (and even enjoyed!) eating at Taco Bell.
Outside the dome, we showed the boys how to do the “freshman stomp.” We then headed over to the quad and attempted to get into Hendricks Chapel, where Matt and I were married 13 years ago (it was locked). The boys heard the fight song being played by the Crouse College bells.

Only a Maine kid would  run through the “snownadoes” being formed with that wicked cold wind.


We ate dinner at the Spaghetti Warehouse – in the trolley no less! – where our wedding rehearsal dinner was held. And, of course, we visited the carousel at Destiny USA, which was the Carousel Mall when we lived in Syracuse.


On New Year’s Day, we went back to campus to take the photo that every family takes when they first visit Syracuse. Sadly, there wasn’t anyone else around to take one of the entire family together.

It was a wonderful way to end 2013. The boys had fun, and Matt and I felt like we were home again. Just for a moment. And maybe, just maybe, it’ll be home to my kids one day too.