I’ve been a lefty all my life, but it seems like I’m more observant now of the issues I have from being left-handed. Maybe it’s because I blog a lot, and everything I observe becomes a blog post. More than likely, though, it’s because I have a three year old who is a lefty.
The other day, while putting together my older son’s lunch for school, I got frustrated because I couldn’t core an apple. What the heck am I doing wrong?

This was the problem:


I guess that’s why I don’t core apples often. I tend to have trouble with the coring part. Is it really that hard to put the serrated edges on both sides? I think the same person that made the apple corer made this ladle.
I also found myself having to order my little lefty some scissors last week. He’s been wanting to practice his cutting. (Though if you ask him, he knows exactly what he’s doing.) The problem is that he holds right-handed scissors in his left hand and uses them upside down. Awkward, to say the least.
So, I ordered him these: 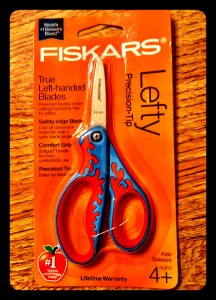 I had to order them because, despite calling around to a number of stores, I couldn’t find a local place that sold left-handed children’s scissors.
I found these scissors on Amazon

(affiliate link), and they work great. Biz is already a pro with them (according to him). He especially likes the colors.
I seem to remember all the left-handed scissors being ugly and green when I was a child, as though we needed to point out the lefty kids who couldn’t cut like everyone else.
Maybe that’s why I cut with my right hand today. Terribly.
Are you a lefty? What issues have you had with every day activities?